If you’re a novice bread baker with high aspirations of crafting beautiful loaves that are crusty on the outside, and are spongy and nonuniform on the inside, and who has tried attaining this goal the hard way, and failed, only creating bricks or dead loaves, read on!

All you need is a Dutch cast iron oven, also sometimes called a French oven, four ingredients, and a lot of hands-off time.

This recipe is originally from a New York Times recipe. There are many variations of it across the web from various bloggers who have taken it and made it their own. I’ve baked a variation of the NYT recipe twice using the proportions below, and found that the recipe tasty and repeatable.

Here are the ingredients and the steps.

I used a Lodge-brand enamel cast iron oven, but there’s other brands like Le Creuset or Staub, that will also do the trick. I used a larger oven that’s 7.8 quarts, but a 4 or 6 quart would probably work even better since it would help the loaf maintain circular shape without the dough spreading out. Another lesson learned is to make sure the knob on the Dutch oven is a stainless steel one, or else it will implode and crack when at the high temperature, like mine did.

1/2016 Update : I have since experimented with this bread recipe a lot and am adding Q&A based on my learnings. Apparently many people experiment with the recipe and there’s a NYT update for it.

Since I first discovered this recipe, I have shared it with many family and friends, experimented with it a lot and would like to capture my observations in case others cross these platitudes.

Do I deviate from the NYT recipe that Mark Bittman published?

Yes, I do not put the bread in a tea towel.  The one time I did, I lost some dough to the towel since the dough couldn’t be scraped out.  Instead, after mixing the dough, I cover the bowl in plastic wrap and put a rubber band around the top while the dough is rising, and put it somewhere warm like over the running dishwasher or near the oven. All other steps I follow the same.

Have I ever fermented more than 24 hours?

I once fermented to bread closer to the 24 hour mark and it started to get liquidy. I have found that anywhere between 8-20-or-so hours is enough.  Any amount of time in between that generous range yields a great bread.

Have I experimented with multiple risings?

Yes, I’ve also tried stirring it every 2-3 hours for several rises and that was good, but I did not notice any blatant superior difference in taste.

Can the dough be prepared in advance?

I have found the recipe to also work if it is mixed and placed in the refrigerator to retard the yeast.  The dough can be taken out 10-20 hour before baking to allow to rise.  Monitor the dough to ensure it’s rising properly.  This approach for the dough is good if you want to prep it in advance – though the prep is so minimal anyhow – and don’t intend to bake within 24 hours.

Does all purpose flour or bread flour work better?

This recipe works well with all purpose flour or bread flour without exceptionally different results.  I hate to keep saying neither yields in a noticeably better product. But, using either yields a great product.  One time, I will make the bread with each flour side by side and see if one turns out tastier than another.

How long does the bread stay crisp?

The actual answer is 3-6 hours. The answer I want is at least 1-2 days. Unfortunately, the original bread recipe is best when eaten fresh.

What does this all mean ?!?

This bread is fool-proof and no matter what you do to it, it will still come out great!

Here’s the recipe with a blend of flours: 40% whole wheat, 60% bread flour. It came out dense and was tasty. Using these proportions, the bread was passable for several days. It tasted like a dense bread should without having a too noticeable difference between when it was first baked and days later.

The bread tastes even better when it’s 30% whole wheat, and 70% bread flour. It has a great nutty taste, without being too dense. 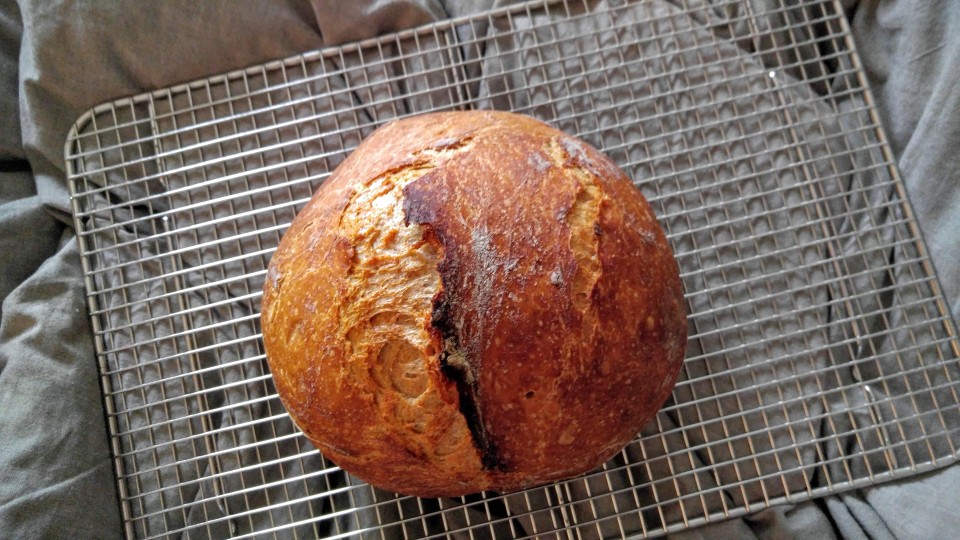